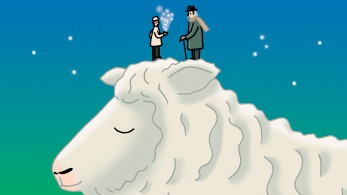 “Space is a warm place, Tamura-san’s art is deeply comforting. I have never collaborated on a book where the images and words combine so perfectly.” – Baku Yumemakura

Truth is a simple thing.

It seemed as though the celebrated old physicist was always destined to stumble upon the young Kazakh boy. For all his fame and recognition, the old man never could have expected his painstakingly crafted approach to the universe would be shattered by the simple thinking of a young boy and his sheep.

About the Author
Baku Yumemakura is one of Japan’s most celebrated modern authors, creating fiction and non-fiction, film, manga, and regularly appearing on various television shows.

About the Artist
Tamura Shigeru is a Japanese illustrator, animator, and manga artist. His animated works have included The Glassy Ocean, Ursa Minor Blue and Phantasmagoria.